Some more videos from our house concert in the summer. Long Time Gone is a song requested by my lady (and the party's hostess with the mostest), Angelika. Joke and Dandelion Seeds are played as a segue. My thinking was that the harshness of the first needed tempering by the (relative) lightness of the second. Tell me what you think.

Posted by hoppersongs at 23:23 No comments:

One abiding phenomenon of playing music is that while doing so good people continually appear who help in the enterprise. I have been assisted over the years many times by kind, willing, unselfish friends (some of them unknown to me before their generosity) who have come forward and contributed.

Two examples: when we travelled to the Stuttgart area of Germany recently (see posts below) we were helped - well above the call of duty - by Norma Huss who arranged a gig for us (not just suggested a venue, but actually arranged a gig!) in An Sibin, an atmospheric bar in Backnang, simply because I asked for help. It made sense out of what would have been a long way to go for one concert - both logistically and financially.

When we played the sister gig in Lauffen at the Phoenix pub (lovely people, lovely place) Stefan Staudenmaier was there with his camera and quietly asked if we minded him taking some photographs. He added that we could have copies.

Here are three taken by him which rank as some of the best shots I've seen of yours truly and the trio members in a live situation.

Thanks Norma, thanks Stefan. 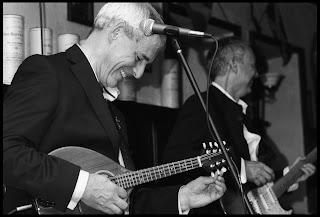 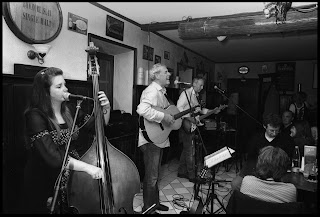 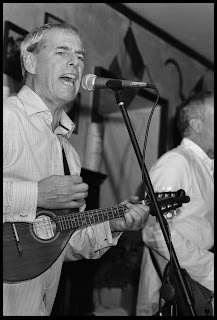 Posted by hoppersongs at 09:54 No comments:

It's rare these days that the adjective is correctly used, but it is here. Now he's gone I'm strangely comforted by the fact that I appreciated him when I was young. I was 16 when I bought my first Bert Jansch album - a 12" vinyl sampler. A 'Long Player', the one with the picture of Bert in front of a windmill.You can see it here; http://www.bertjansch.com/disco.html. I still haven't really recovered from that first encounter.

This is a video of him playing 'One For Jo', a song offering advice to a lady about her man. It's from the album 'L. A. Turnaround', a country-flavoured collection produced by ex-Monkee's man Mike Nesmith and Danny Thompson. It's lovely in every way; the singing, the song... but the playing is effortlessly brilliant. Awesome, in fact.

Posted by hoppersongs at 04:37 No comments:

He has been my hero since I first heard him play when I was 16. I've considered giving up guitar because I couldn't play like him - and I still can't.

I've watched him perform many times, always rapt, and was thrilled to play support to him once or twice. The first time I found myself unable to speak in his presence, so much did I want to say. The second time, determined not to miss the chance I blurted out that I'd been a fan all my life - and who knows what else - and Bert, shy man that he was and embarrassed at my outburst, slowly turned and walked away. I still loved him, though.

As great in his way as Hendrix, Dylan, Lennon, he set a standard for folk guitar and commnunication in song that I've never heard matched.

I've got most of his recordings. As someone once said of another great; he's gone, but I don't have to believe it if I don't want to.

Posted by hoppersongs at 06:33 No comments:

The Ballad of the Suffolk Five

Here another of the songs that I'll be posting on YouTube over the coming weeks.

This was the first of my songs to recieve national radio airplay.

Posted by hoppersongs at 03:42 No comments: