The Looking For... tour ends at Lütt Matten

Now, here's a thing: a singer might want to become part of the fabric of a venue, yes? Well, I have. At Lütt Matten the proprietor, Rainer, decorates his ceiling with the posters of (I like to think his most impressive) former artists. And I'm there! Part of the fabric...

Anyway, Lütt Matten is a rabbit that gets killed and eaten by a fox and a crow as told in a folk story-song in the Platt Deutsch dialect. (Stick with this blog, you'll never want for small talk on a first date.)

Only a short drive from the previous night's gig, we turned up to this fine Musikantenkneipe (Musician's pub) run by friendly host Rainer Martens in quiet mood knowing this was the end of our short tour. Truth to tell, I was tiring. Five gigs in five days with the driving that goes with it is heavy going. I needed beer.

Rainer was not to spend the evening with us as he had to visit his girlfriend near Hamburg as she was poorly (hope she's better, R!) but Beata was on the bar and she looked after us royally - you always know it's going to go well when the host(ess) takes the trouble to find out about you and then gives you the big build-up. Ellen and Bert were our best fans (Ellen likes the Irish and has a shamrock tattoo to prove it & Bert bought us a whiskey by way of encouragement). We played well, the audience stayed for the full evening - including another impromptu acoustic post-gig session - and a good time was had by all.

Ian, seeing that his big cousin was waning after a full-on six days, dug in to help give the evening some extra zip. Now that's what you need from your side man - good on you cuz. This is a partnership that is finding its way.

Now, we just have 12 hours to drive tomorrow...
Posted by hoppersongs at 01:59 No comments: 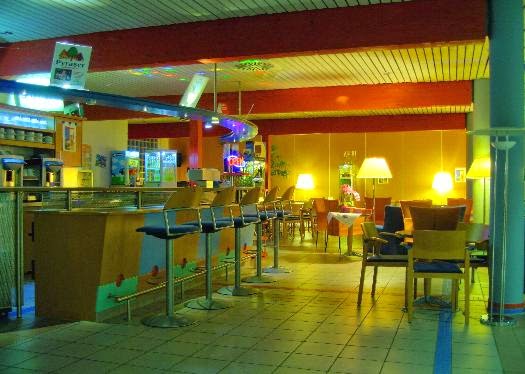 Cafe Instinkt: the coffee bar in Die Klinik Nordfriesland
Our penultimate gig on the Looking For... tour was in a less than usual venue - a bar in an oncology after-care rehabilitation hospital. My second visit. Ian's first.

Perhaps it's that Thomas (our host) and his audience have a different perspective, but the vibe here has a calm welcome that makes it special. It's somehow relaxing to be in this place and that gives it a pleasant shift in mood from the hurly-burly of most of our other venues.

I had prepared two sets before we set off; one for the bar-gigs and one for the concerts. Some of the more delicate material won't stand up to the demands of an audience that hasn't necessarily arrived specifically to sit quietly and listen. However, my cuz and I decided that we'd settled in to the bar-gig set rather comfortably and decided to stay with it with just a couple of tweaks to include some of my solo material and to tailor the running-time to Thomas's requirements.

The quality of the sound in the room was very crisp and it made the performing experience, to my ear at least, quite a pleasure. I always enjoy a bright room in which I can clearly hear what I'm playing and after an intro by the host we played our best gig of the trip so far to our largest audience. Ian was on top form, settling in to his less accustomed role of accompanist, but also beginning to relish the brief spot in which he features his own material. He was great. And he managed to accommodate a couple of my occasional musical trips off-piste - always a pre-requisite aptitude in any of my musical partners.

I thought I performed well, too - apart from a couple of lapses in memory the possibility of which always seems to lurk in the background when I sing. Hey, ho. But Naked was strong, the solo songs went down well and Jeffrey and Robert and I - that oldest of reliables - garnered a very powerful response.

And we sold some CDs, and we made some money, and Thomas puts his performers up in a luxurious thatched-cottage-style hotel, and we're staying here for two days, and we're going to walk the beach and chill for the day before our next and final gig nearby at Lütt Matten ...
Posted by hoppersongs at 22:33 No comments: 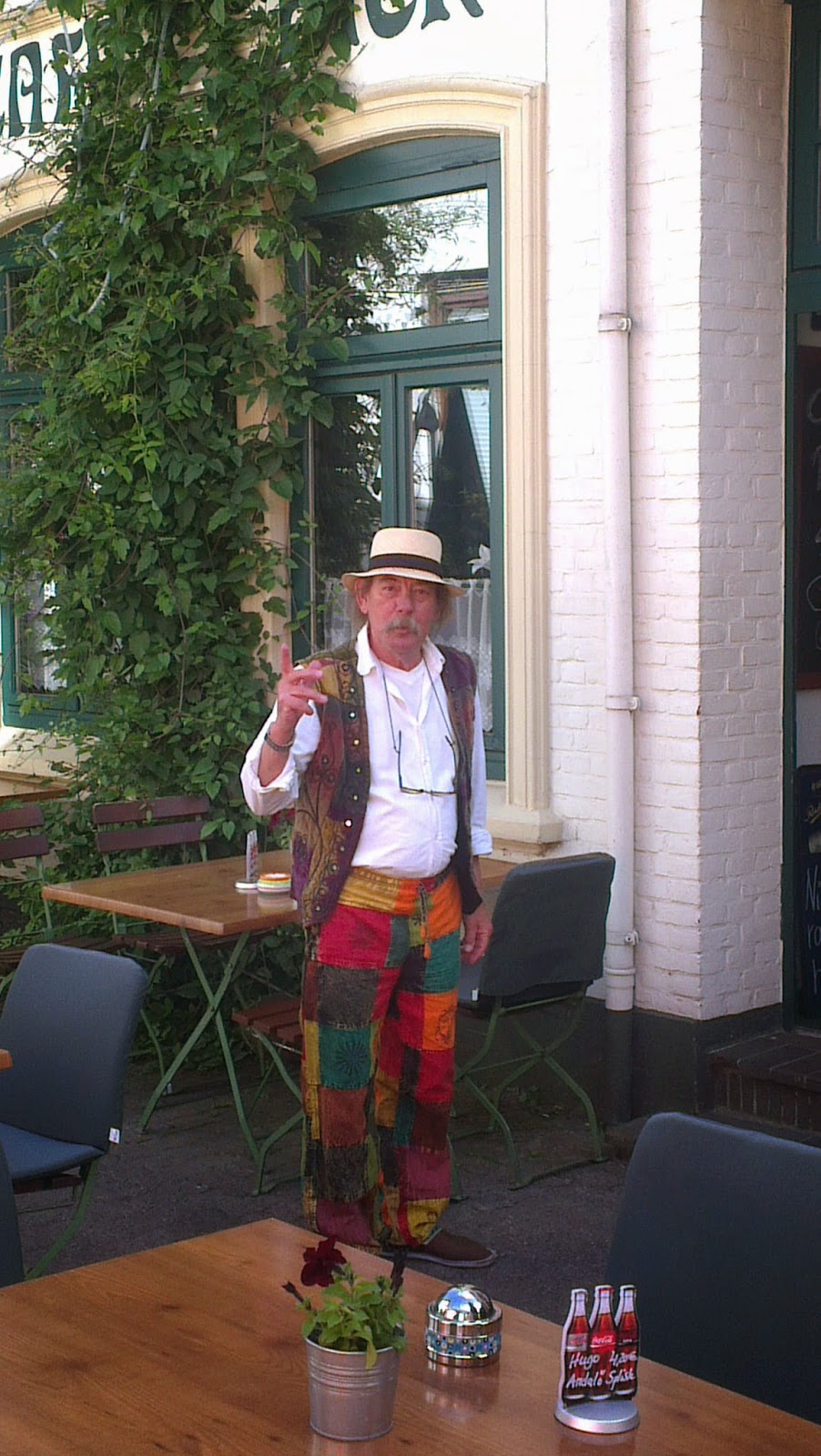 How Hans-Peter Scholz ended up running the finest music bar in Europe for 30 years (it's official, see the celebratory poster behind the bar) in a fishing village in the outback of Schleswig-Holstein is anyone's guess. He should be in a wrong-side-of-the-tracks drinking den in N'Orleans or a 1950's London hipster coffee bar.

That he is where he is, doing what he does, is a balm to the heart of any genuine performer who happens his way. Ask Ian, whose singer's soul was saved (see last post) by a fantastic night in Kappeln, playing to an audience who came to listen and appreciate - on account of how that's what you do when you go to Palette 'cause it's Hansi's place.

And we played great, and we sold CDs, and we made money, and we ate post-gig matjes filet - like you do at Hansi's.

The contract between singer and bar-owner never feels so clear and honourable as it does at this welcoming music bar. Hansi knows what his commitment to the artist is and it's therefor easy to respect your side of the deal.

And it all works. It's great. It's lovely.

On to St Peter-Ording!
Posted by hoppersongs at 08:47 No comments: 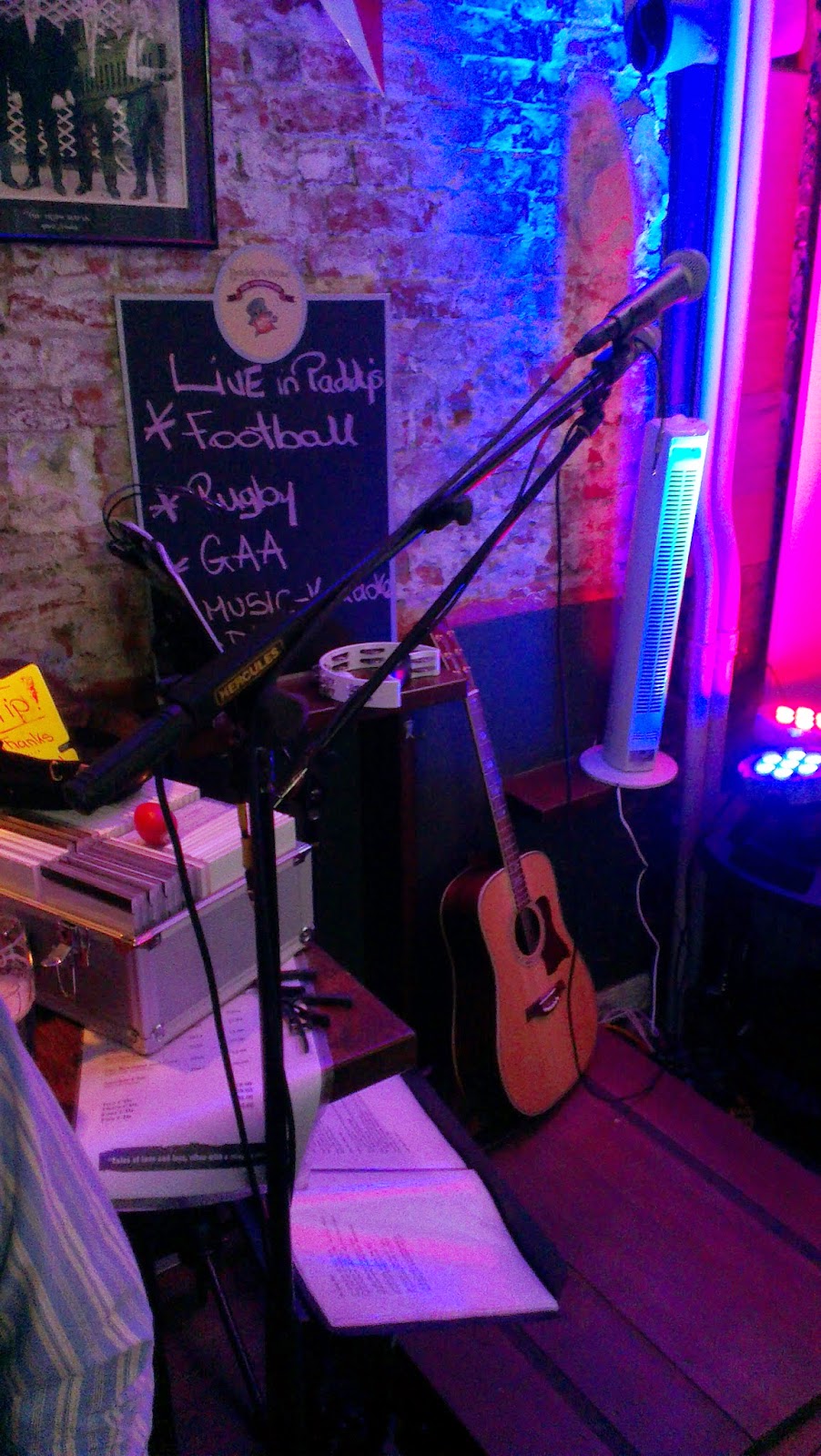 OK, Eamonn* was up front, and gigging in a sports bar in Germany on the day that nation played Ghana in the World Cup was not the best idea ever, but we were in Berlin on the Friday and Kappeln on the Sunday and Hamburg was sort of mid-way and I didn't want a blank night...

I think we won some kind of prize for fitting onto the smallest stage in Christendom, thus reinforcing our admiration for our Bose PA - couldn't have done it otherwise.

Anyhoo, the audience was not so interested in the angsty ramblings of an Irish-Anglo singer-songwriter and his cousin when they had drinking and football to contend with. Also, the twelve-hour-long celebration of a young Colombian lady's 21st birthday that we tagged on to the end of was louder than us and, probably, of more interest to any non-football obsessed bar-goer than we were.

Germany drew - which was probably better than the result we achieved. But we stuck to our task and subsequently managed to find a tapas bar that stayed open beyond 1.00 a.m. that served good cold collations and red wine, so the evening was not a complete failure.

So, goodbye to Paddy's bar and on to Kappeln and the ever-charismatic host of Pallete, Hans-Peter.


* Genial bar-owner and host who said it might not be a good idea
Posted by hoppersongs at 08:23 No comments: 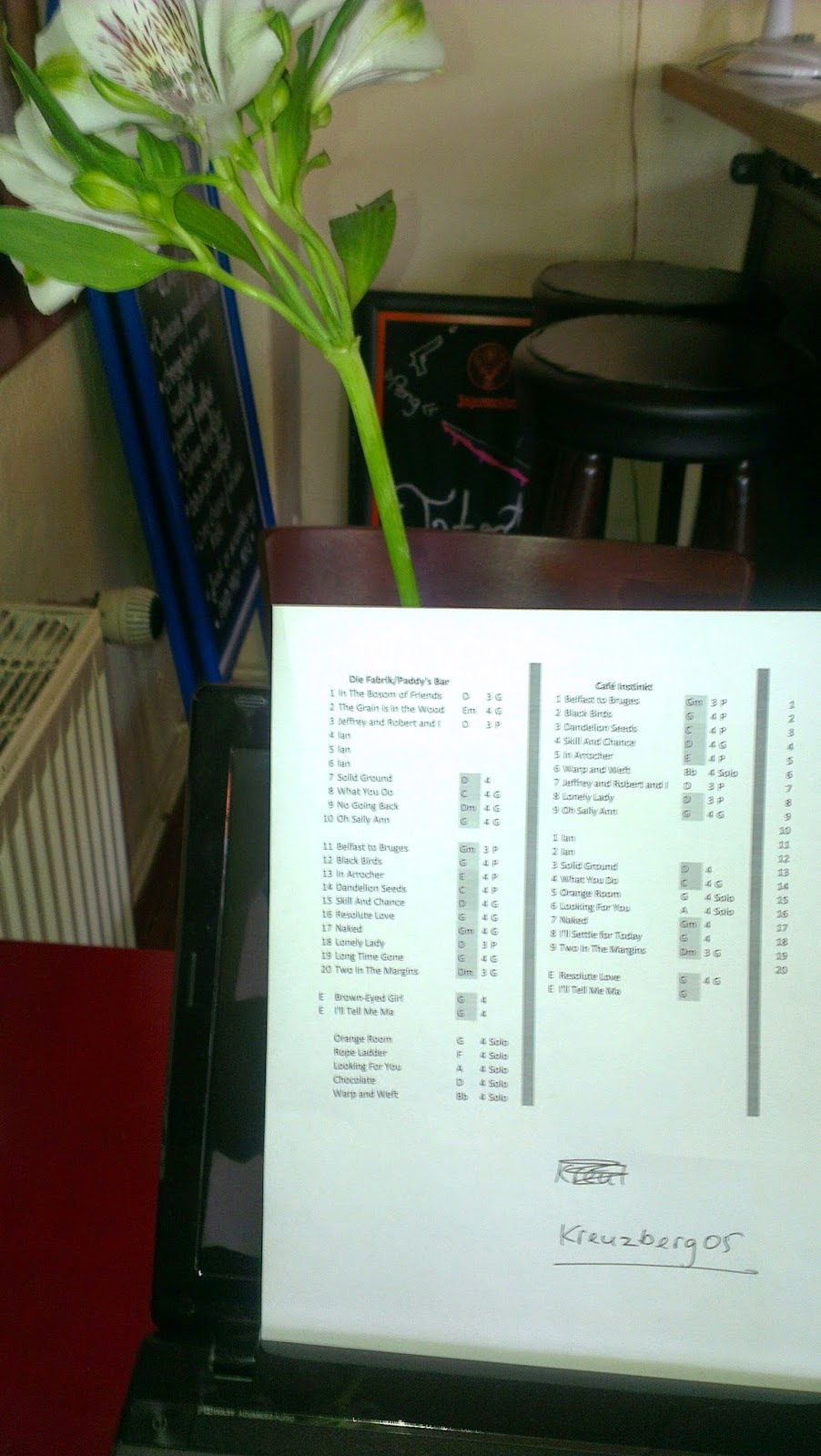 Accompanied by m'cuz, Ian McFarlane (who has done a sterling job, thrown in at the deep end, as percussionist, harmony singer and second guitarist, playing 30 songs he didn't know a week ago), I played two 10-song sets either side of a World Cup match (such are the pragmatics of the life of a not-so-famous-singer-songwriter).

Martina and Andi and Liverpool Ian - the core of my Berlin fan-club - all turned out, bringing friends along to provide a friendly audience which bolstered the usual group of hotel guests and lovely staff members to create a warm and welcoming ambiance for the itinerant musos.

We drove overnight from Calais, arrived at 11.00, breakfasted, slept then rehearsed, set up, slept again then performed.

The new Bose system sounded great, the performers remembered their stuff, Ian played a great one in his own mini-set-within-a-set, and it was all good. France hammered Switzerland, we played an even better slightly alcohol-tinged post-match-second-set and all was even better.

Great to see everyone here again. Ian has already decided we're coming back next year, so, apparently, we'll be seeing them again soon!

Thanks Die Fabrik, thanks Berlin - and I hope all you enjoy the new CDs you bought (Solo and Looking For...).

On to Hamburg on Midsummer's day!
Posted by hoppersongs at 00:55 No comments:

I'm playing five gigs in Germany soon: Berlin, Hamburg, Kappeln, St Peter-Ording and Garding (20th-24th). Apart from Paddy's Bar in Hamburg they're all places I've played before. I've not been doing enough live work and I'm keen to go and get in front of real people. Will they like it as much as me? Let's find out!

I'm being accompanied by Ian McFarlane (cousin and singer-songwriter in his own right), so there'll be a new flavour to the proceedings.

The bulk of the material will be from the two new albums (both recorded this year - I've been busy): Solo and Looking For... .

Got to go, more perparation to do!