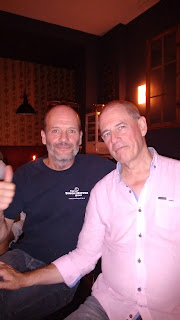 With me here is Andi Kort, one half of the Simon Hopper fan club (Berlin branch). Great to have him and Martina, his lovely lady, along last night for the solo gig in.... 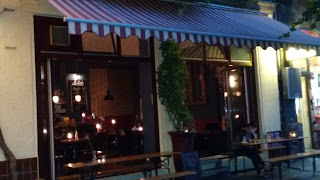 It all happened: I sang my Die Fabrik songs* (this place to me - as mentioned previously - is as New York's Chelsea Hotel is to Dylan and others); people came in off the street to see what the noise was about (and stayed); sister Brigid and chum Dave brought a personal element to the proceedings and Fedora brought beer and wine and generally managed the ambience.

I have made friends here over the times I have visited and played. One, Achim, a long-term resident in Die Fabrik who befriended me and with whom I exchanged unexpected intimacies over white wine was missing last night. He recently died of a heart attack. He was my age. I was very sad to hear the news. I thought of him as I played.

I also thought of my cousin Ian who accompanied me here the last time I came. It's not the same alone, cuz.

Notwithstanding all the above, last night was a good night. It's good to have good nights in the face of all that life insists on, don't you think?

Goodbye Die Fabrik, goodbye Achim. Thanks to you both.