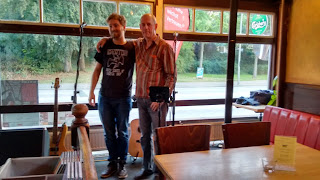 The German 'donnerwetter' can be translated as thunderstorm.

Duo #2 played the music café Donerwetter last evening. We had to cross the Elbe to get to it. Fortunately the long queue of traffic on the tunnel road was heading the other way. Less fortunately, the weather didn't correspond with the name of the venue - it was still 25 degrees at 10.00 pm - and the good people of Hamburg had better ideas about how to spend the warm evening than sitting indoors listening to an itinerant Irish singer and his Swedish sidekick.

We were great, as it happens, but there were few to attest to it. Owner Mattias and his crew were charming, however, and looked after us royally.

We had to make an evening of it by repairing to base camp at St Pauli (whose football team won their first match of the season yesterday - Tim and I were there - it was great) with the aforementioned brother and a second Swede, the roadie whose nickname, inexplicably, is The Teflon Shark, and drink beer and wine, eat wasabi nuts and talk bollocks 'til the early hours. It's tough etc, etc...

I part company with Filip today. He's a great accompanist and we played well together - many thanks to him.